An open letter to the suicidal

(US and International suicide hotlines at the end)

If you made it past a really bad yesterday it means that you’re still here today, able to reach a computer, your eyes aren’t burning badly and too blurry from exhaustion. That’s a lot than what some people can say, the ones that collapse into an unconscious heap, sleep-starved. I don’t know what your life is like so I’m not going to pretend that I do but I have an idea of  how it can knock a body down.

It’s extremely saddening to hear when someone gives up on the whole business of existing. Suicide isn’t the solution. If anything, it makes life even more terrible for those still alive. This is issue has been plaguing me off and on for the past few months; why is it so appealing? Oblivion? But what use is that? When so many people are fighting every second, grabbing with hands and feet onto the thread that still binds them to life.

“There’s no such thing as an ordinary human.”

To friends and family and co-workers and even strangers

I understand it’s difficult to spot when when someone is thinking about committing suicide but whenever you see a friend depressed or withdrawn, try to talk to them. A lot of people feel unloved and not cared for, that they’re so insignificant that their absence won’t even matter. Show them that you’re there whenever they need you. 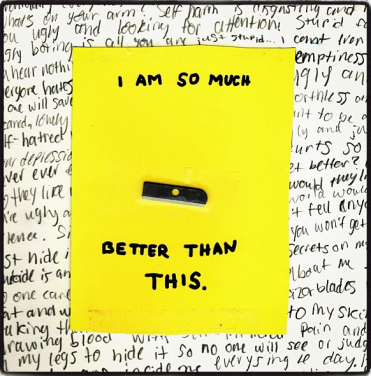 I honestly can’t remember where I found this and I sincerely hope it’s not something I could be sued over.

To you, the suicidal

Don’t do it. Please please please don’t. You’re so much more than nothing. You can turn around if you try and you really have to try. If not for your sake now, think about the family and friends and the strangers you’ll never meet, because you can affect everyone of them. One man caused the holocaust, he made that difference. So what change can you, a good person, make?

“900 years of time and space and I’ve never met anyone who wasn’t important.”

You can be so much more. There might not be anyone else there for you but you. You are all that you have and you can be strong. I know, personally, someone who very nearly killed herself for the most stupid reason and today she see’s what a fool she was. Not all worries are stupid, or inconsequential but if you’re still breathing the next day, well, it means that it hasn’t destroyed you. If you can survive another day then you can do it again, again … and a thousand other days.

END_OF_DOCUMENT_TOKEN_TO_BE_REPLACED

I wrote this while I was listening to Adele’s ‘I Can’t Make You Love Me‘ but I feel that it read in the rhythm of her version of ‘Make You Feel My Love‘.

The night I’ve been cloaked under has lasted so long. The seasons come and go before my eyes, like watching the world go around from my bedroom window. I’ve driven people away yet I need them close. I … I am a tangled mess, like old hair stuck in the bristles of a brush.

A snowflake tentatively approaches me, as if knowing that I’m too hot to touch but still wants to feel the burn. That impulsive snowflake melts before landing on my face.  I’m too hot even for me to bear.

And when the cool fall breeze breathes along my body, it chafes at my skin.

Who will love me when the morning nears? After the witnessed darkness of my nights? Who will love me with the sun decides to shine, illuminating the drying trail of tears? Your beautiful face comes to me shining in the pale moonlight.

Do you think I have anything left to give? Does that molten emotion still flow in the husk of me? It’s a question you’ll have to be brave enough to seek. But I’d swear it to you, your memory is what’s been keeping me alive. Come closer and let me gather you near. Come a little bit closer like you used to do. How else can I make you feel my love?