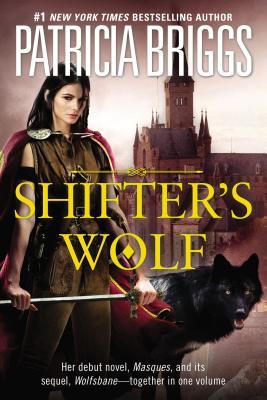 Rated it: 3½ stars      Recommend it to: Fans of the fantasy genre; shape shifters, period fantasy novels.

I was excited to read a couple of the first books by Patricia Briggs, a natural compulsion being I’m a fan of her Mercy Thompson series. Basically Shifter’s Wolf is an anthology, Masques and Wolfsbane both set in a fictional realm of a mercenary and spy from Sianim and her enigmatic companion, Wolf.

Mrs. Briggs did mention that it might not meet up to her current standard of writing that her recent readers are accustomed to since she was, obviously, a novice back then. The books went out of print until lately and she didn’t want to change anything from the original plot, only to brush up and polish what was there so that their first readers can come back to something familiar and for us, the new lot, so we won’t find it terribly juvenile. I think that’s very thoughtful and sweet of her.

END_OF_DOCUMENT_TOKEN_TO_BE_REPLACED

This is the second time I’ve read this and my oh my was it an eye opener. In the previous review I think I stated that I felt like everything seemed stuffy, which loosely translates that I didn’t really have an idea what the dickens was going on in the most crucial scenes. Heh, I wonder how it is, or why for that matter, that I continued to the second book in the series. Now with a fresher pair of eyes and a broader frame of mind I actually got in on the action.

Mercedes Thompson isn’t your average VW mechanic. Does yours regularly service a Mystery Machine replica owned by a Scooby Doo fanatic who happens to be a hot vampire, works with an iron mage and lives over the fence to the local alpha’s house? I didn’t think so. Oh, and she turns into a coyote. I really like her, I mean she could be a badass but she knows where to draw the line.She may be physically inferior(which might be too strong a word) but she makes up for it in mouthing off to authority and those above her ,but hey I can’t blame her with all of those overbearing werewolves around, she had to stand up for herself.

Mercy’s an okay gal, she’s tough, funny, caring and doesn’t like to be out of the line of fire when she knows that she could be helping.She doesn’t have tons of magic (or any of it so to speak)so that she could just wriggle her pinkie and WAM leveling the street with vampires, nope,that’s what makes me like her even more, she relies on her instincts and quick thinking rather than power.

END_OF_DOCUMENT_TOKEN_TO_BE_REPLACED

After an upbringing of proper behavior and oppressive expectations, Aralorn has fled her noble birthright for a life of adventure as a mercenary spy. Her latest mission involves gathering intelligence on the increasingly charismatic and dangerous sorcerer Geoffrey ae’Magi. But in a war against an adversary armed with the power of illusion, how do you know who the true enemy is—or where he will strike next?

When I saw this on the shelf the cover spoke to me, not that I understood a thing except it promised it would kick butt. Then my eyes flickered upwards and into the author’s name. I’ve read about four books into her Mercy Thompson series prior to stumbling across this, and I like those so I was kind of excited to see what her earlier writing looked like. This book here was originally two separate books of the same series, Masques and Wolfsbane respectively. This I learned while reading the Ms. Briggs author note, were here first ever published works. After relatively weak sales the went out of print until recently.

So I braced myself and sure enough there were a few transparent parts when I know what will happen, there were some difficult spots here and there where they conveniently got out of relatively unscathed. This takes place during what I would say Medieval times, so that plus some magic I was set.  Aloran, I liked her, a free spirit that refuses to be chained and has a thirst for information and tales alike. She knows that she’s not her best a swordplay but utilizes what she can do for max effect, she’s a shape shifter changing appearances both human and animal, an invaluable asset to any spy. END_OF_DOCUMENT_TOKEN_TO_BE_REPLACED