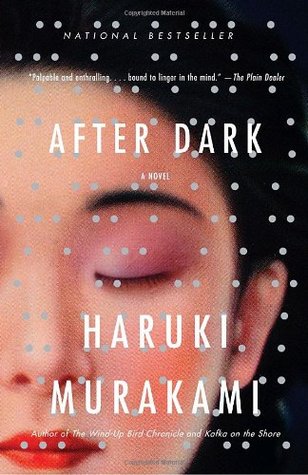 Mari has made her way through the long hours of darkness, traded many words with the night people she encountered there, and come back to where she belongs.
– page 243, 6:52 AM END_OF_DOCUMENT_TOKEN_TO_BE_REPLACED

Isn’t it a beauty?

I’ve been eying this one up for a good time too. The title alone caught my attention since I’m a night animal myself. I’m at page 181 of 244, I’m not sure what to say and I mean that in a good way. I could probably gather my thoughts properly if I wrote after reading it but I’m trying to do like an in-between kind of thing.

At its center are two sisters—Eri, a fashion model slumbering her way into oblivion, and Mari, a young student soon led from solitary reading at an anonymous Denny’s toward people whose lives are radically alien to her own: a jazz trombonist who claims they’ve met before, a burly female “love hotel” manager and her maid staff, and a Chinese prostitute savagely brutalized by a businessman. These “night people” are haunted by secrets and needs that draw them together more powerfully than the differing circumstances that might keep them apart, and it soon becomes clear that Eri’s slumber—mysteriously tied to the businessman plagued by the mark of his crime—will either restore or annihilate her. END_OF_DOCUMENT_TOKEN_TO_BE_REPLACED

A stunning glimpse of a Winter Wonderland! This has got to be one of the most spectacular winter photos I have ever seen.  Is that train bound for the North Pole?  I knew Japan was beautiful, but my mind would have a hard time dreaming up a more beautiful winter wonderland.  So please, take another sip of hot coco, warm up by the fire, and enjoy Hideyuki’s amazing photo. Once you have soaked it all in please visit his site at http://500px.com/hideyuki-5.

Take it away Hideyuki:

This photo was taken two years ago.  This is the first bridge over the Tadami River in Mishima, Fukushima, Japan and famous for  the  Japanese railroad.  By the way, Fukushima divides into  three areas – Aizu, Hama dori, and Naka dori.  Here in the Aizu area the nature is very special. In winter, Aizu receives the heaviest snowfall  in almost…