Strength, rebellion, beauty, and resilience are clearly there. Without question, Gill writes from the heart and with passion. Her renditions of the Disney princesses and the Greek goddesses were absolute gems that I had to read out loud for my brother and sisters. These were more like prose in form, they’re something else, though I felt some were a tad too romanticized, like Athena, which isn’t necessarily bad.

On the whole, I think it’s a pretty neat book. It’s a slim volume, has over a hundred individual poems. However, while each and every poem has merit, some were better articulated than others.

END_OF_DOCUMENT_TOKEN_TO_BE_REPLACED

My favourite movie Ever: Mulan

Mulan is a Disney movie that was released on June 19, 1998. Though not the daughter of a king or other form of royalty, nor married to a prince or the equivalent, Mulan is often regarded as one of the Disney Princesses. She my favourite of the lot and to me, the best of them!

When her father’s called to serve in the Imperial army, free-spirited Mulan breaks tradition by taking his place. Mulan’s concerned ancestors send tiny guardian dragon Mushu to bring her back safely – if he can stop causing more problems than he solves. Eventually, Mulan proves her worth as a highly-skilled warrior, impressing fellow soldiers Ling, Yao, and Chien Po as well as Captain Li Shang. Soon, her true identity is discovered and she is sent away in disgrace. However, China’s future and those she loves depending on her, Mulan must find a way to convince the others that she has what it takes to be the best and defeat the Huns.

Mulan is set in China during the Han Dynasty. The film’s protagonist, Fa Mulan, is the only daughter of aged warrior Fa Zhou. She impersonates a man and takes her father’s place during a general conscription to counter a fictitious Hun invasion led by Shan Yu. Along with her guardian dragon Mushu, her captain, Li Shang, a lucky cricket, “Cri-kee,” and her companions, Yao, Ling, and Chien-Po, she battles the invading Hun army.

Her’s was a story inspired by the Chinese legend of Hua Mulan, please click on the Wiki link above to learn more. I cannot forget first time watched the movie when I was around eight or ten years old, the movie was wonderful, everything was beautifully drawn, the music was just … what can I say, it was memorable! But let me tell you at that time I was taken with how everything was in pretty colours and how Mulan was the most beautiful girl I’ve ever seen and how she could kick butt!

As young as I was then I understood what she did was forbidden and very brave. But it was after re-watching Mulan countless times over the years (so much that my family hides the DVD remote) did I understand her reason for what she had done was a noble one; she didn’t want her father to fight another war, as old and physically weak as he was and another reason was to prove her worth, that she can do more than baring sons. After a fight  with her father, Fa Zhou, her pleading with him that he shouldn’t go and him telling her it was his duty and that he knows his place and it was time Mulan knew hers, that struck a nerve. That night she made the decision to disguise herself as a man – later decided on the name Ping – and take his place. If I go on much longer about what happens I’ll end up telling you the entire story, and I don’t intend on doing that, but I will be telling you all more of why I love Mulan.

My hero, Fa Mulan! You see that cricket in there? He's real somethin'! (Image via fanpop.com)

For some reason I’m unable to clearly describe the things and people that I love, maybe because words fail to do them justice, but I’ll give Mulan a try. She’s beautiful both on the inside and outside. Mulan’s a very kind young lady, free spirited, head strong, tomboyish and as we know, she’s very brave. She tries to be the perfect daughter, to make her parents proud of her, but in trying to be ‘perfect’ she knows that’s not who she really is. When Mulan went off for training in the company of her guardian the pint-sized dragon, Mushu (voiced by Eddie Murphy), Cri-key the cricket and her trusty horse, Khan, she had gone to a point of no return she must do what she had set out to accomplish. Her perseverance paid off, she became a highly skilled soldier and saved China.

Mulan sang the song above after that unfortunate fiasco at the match maker (I will include that video in another post). She loved her father dearly and wanted to make him and her entire family proud. Every time I watch this movie there’s this one particular feeling that comes over me, it’s like, oh I don’t know, like when you wear a shirt or dress on some occasion and when you wear it again a while after, the memories of that day still lingers and you can still feel how you did that time how long ago. Yeah, it’s a lot like that. 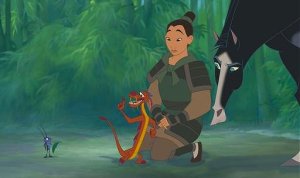 There’s the sequel Mulan 2 which is as enjoyable and lovely as the one before but I love the first movie the best!

Once again you can visit this Wiki page for more info.

I still feel that I haven’t fully described the beauty Mulan, both the movie and the girl, but hey I tried. You can expect more videos from Mulan in the future! For those of you who haven’t seen either movies please give them a try and feel for yourself what I feel!