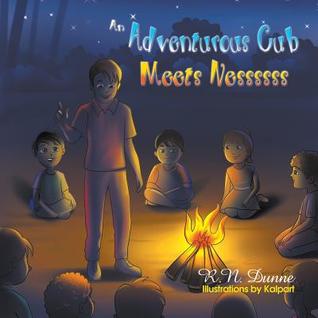 I’ve received a free copy from Author Marketing Ideas on behalf of the author in exchange for an honest review.

The Cubs are eager to go on their very first camping trip. It follows the adventure and mishap of friends Darrel and Troy. The anticipation of the entire group was clearly palpable; I recognize the feeling precisely when I recall my first field trip to the big city when I was about ten. It’s like a new layer of the big wide world is being peeled away, a heady sensation and one easy to get carried away with.

For instance, when it comes to listening to the adults who know better when they tell you to not venture from designated safe areas and to not go beyond the specifically marked ones, in red no less. Unfortunately, these two got the message the hard way when they ignored the warnings. They encountered a certain critter by the riverside and to say the least things took a turn for the worse.

I was especially touched by Darrel’s thoughtful gesture to keep Troy warm before he ran off for help. It was informative also for Troy to note that he must stay calm and still to prevent further complications from a particular injury he sustained, and later in on the importance of not startling the critter with a loud noise. It’s excellent for children to know these useful bits of information when interacting with the environment. Then there’s Darrel’s quick thinking, taking the initiative with dealing with the second threat.

After having read this, kids can take away a reasonable set of knowledge from just thirty-four pages. Initially, I thought Nessssss had something to do with Nessie, the Loch Ness Monster because I’ve never END_OF_DOCUMENT_TOKEN_TO_BE_REPLACED

Fantastic Beasts and Where to Find Them (Hogwarts Library) by Newt Scamander, J.K. Rowling

See my review for The Tales of Beedle the Bard

The first time I read this it was a copy of my cousins, three years ago when I was visiting in England. A slim red paperback edition with Harry’s scribbles which I’d thoroughly enjoyed. I believe that being on the island, while not in Scotland where Hogwarts is, added more to the sublime atmosphere. At the time this was one of the three books of the Hogwarts Library Collection that I did not have.

Ah, but I remedied that recently and now I have in my possession the edition above published just last year. A gorgeous hardcover, smooth as a baby’s bum and has an illustration of a Runespoor, the three-headed serpent, on the back cover.

While sans scribbles it has a forward by the man himself, Newt Scamander, who briefly mentioned on the incidents in the movie adaptation of Fantastic Beasts which in my opinion was a brilliant touch for those of us who have watched the movie, fostering a sense of familiarity.

The introduction states what is considered a Being and a Beast and the controversies that have challenged and modified the definitions over the years; and how they’ve secretly coexisted with muggle-kind. END_OF_DOCUMENT_TOKEN_TO_BE_REPLACED

Harry Potter and The Chambers of Secrets by J.K. Rowling

Harry Potter’s second year at Hogwarts preluded with an unexpected visit from a most unlikely creature, Dobby the house elf, who brought with him ominous tidings and a warning not to attend the wizarding institution for his own good. Despite Dobby’s numerous interventions Harry with the help Ron, and his twin brothers, escaped not only Privet Drive but the duo also worked around the block barrier of Platform 9 & 3/4 in a most interesting fashion.

The plot is centered around the legend of the Chamber of Secrets and the Hier of Slytherin who has not only access to it but also the beast that resides within. It officially began with the first victim Mrs. Norris, the caretaker Filch’s cat, who was found hung petrified by her tail in the halls next to a chilling message scrawled on the wall in red lettering.

During an implemented dueling lesson led by the woefully incompetent and absolutely rank git Gilderoy Lockhart, latest DADA professor, an incident involving Harry, Draco Malfoy and Ernie Macmillan led most of the student body to suspect that Harry was the Hier. Where Voldemort fits into this? That’s an excellent question.

All the signs were there but I, like most I imagine, was too anxious and curious to take the time to analyze much in my first reading. Subtle hints, such sneaky writing has never delighted me and at the same time invoked a sense of sadness before.