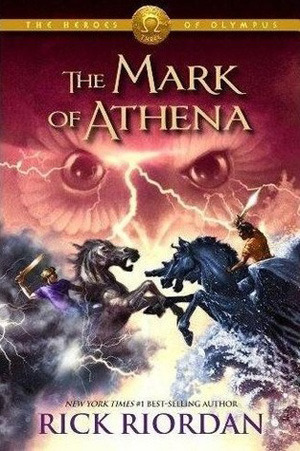 Hazel. I love love love Hazel Levesque. Out of the seven she’s the most intriguing, for obvious reasons, but aside from that she has an honest to goodness ol’fashioned softness that surrounds a steel core and it’s like there’s a perfect harmony about her; strengths, insecurities, empathy and competence. I had wanted to see more of Hazel and I strongly suspect I will in The House of Hades.

Piper had her own shares of misery, however there’s a stagnant quality to her character. Don’t get me wrong, she has her special brand of bravery, I mean they all do, but I think it’s past time she ease up on dwelling too much on Jason. Okay, I’m a bit conflicted and you can see this when I say I understand that she’s justified in that since half of their relationship was based on an illusion and in this book it’s being cemented.
It was never mentioned in The Lost Hero that she could see stuff in her knife, so that was neat. Despite her charmspeak saving all of their necks plus her diplomatic skill, she constantly sells herself short but I hope she grows out of it and into a firmer stance because it’s going to get old fast.

I could go into Jason and Percy but it’s basically the two of them accepting that they’re both alpha dudes who need to get along and get used to not always shouldering the bulk of the responsibilities. Percy has developed quite an unexpected phobia and he has some tough choices, or lack of any I should say, when it comes to Annabeth and her solo quest; somebody had said something about these couples being mushy, pshh, I like this mushy, distinctive from mooning to be sure.

I breath a sigh of relief they’ve all finally coalesced. Each of the seven have skills that compliment each other and are effective against what they are up against and they can only succeed if they are united not only extended to being on the same ship but also overcoming differences. No one demigod is useless, Leo especially needs to understand this. He think he needs is a girl like the other guys to mean that he’s not alone and there’re these idiot gods (blasphemy!) that keep calling him the seventh wheel, but that’s not true. There’s enough friendship and love to last him his entire life and then some. But then again, we don’t always see the obvious.

The Mark of Athena was one wild ride from start to finish, and the chain of events were good enough for me. It’s amazing how they squeeze through these impossible situations, well at first glance, but these aren’t normal kids to begin with. One thing I’ve only just began to question: how in Hades are they doing all this in less than a freaking week? How realistic, within context, is it that they kick monster butt and then regroup in so little time?

Another reviewer had said this was like a sort of filler book. I am not really sure what that means; probably along the lines that most of the events didn’t actually move them forward significantly in defeating Gaea, though I believe they acknowledged the importance of what the Mark of Athena is leading to. If that’s the case I’m going to have to disagree in that a lot of what played out is important for character development and how the effects these tiny changes will affect them next. Oh, whatever the ‘thing’ is in Rome is it’s helluva necessary if they want to unite the camps.

On a totally random note, the one god who knows what’s up is Hephaestus; that guy’s got reality television on Mt. O. He sure knew how to make drachmas off on all that cataclysmic drama. And I don’t know how far I’m reading into all this but one of the things I think Rick is trying to point out is that no matter what problems that drop on our heads or those that we were born into, we have choices to make that can – not necessarily solve them – move us on a much better path, because we have a hand in our fates and we have to try, demigods are no exceptions.

Also, Uncle Rick, HOW DARE YOU! After all of that running from Camp Jupiter, cross country, over the Mediterranean and finally they got to Rome and WHAT happened? I’m just glad that I got into the fandom when all they books got out and I didn’t have to wait in agony. Oh gods, Nico. NICOOOOOOOOOO! Yes, the puff ball of death is back. I could squish that boy.