After staring at this photo for the most of the week, my mind (more like Favashi, in the background) chased inspiration since I was still thinking at the pace of honey on a hot day. So here’s my little piece for Ermilia’s Picture it and Write! photo prompts! 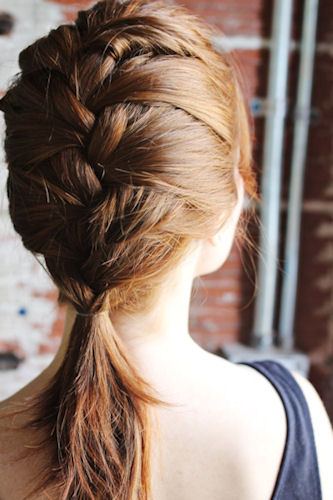 I had been furious with myself for the past few months. I’d made a rash decision and cut my long, brown hair half its original length. I was to be blamed but good friends are what they are, super nice people, who break the truth to you as it is with no chocolate frosting on top even when it’s the last thing I wanted to hear. The few close ones I can really say I have do come through for me. Like now, Clyve’s fingers were working their magic on my head, ‘finishing touches’ I was informed five minutes ago were in progress, but that was right before he started all over again.

“Mmm … well this is the best I can do. It doesn’t look bad at all when you put it up like this,” he finally said. I heard a sharp snap and he spun me around in his chair and showed me the French braid on his phone. “But I’m still mad at you for not coming to me first,” he whined and sounded more than a little hurt.

“I’m sorry, okay? Like I said, it was a stupid thing to do and I will regret it for the rest of my life but I know you would be a darling to fix me up,” I fluttered my lashes over a sincere smile, “I really like what you’ve done with it.”

“Aw well, it’s nothing,” he gestured with his graceful hands, mollified, “I’m closing up for lunch in a few, what say we grab something at Subway’s?” Clyve asked as he loosened the Velcro on the polka dot cape around my neck. I nodded and picked up my tiny cup of tea on the counter.

My eyes wondered over to the man who just came in. Blackest hair I’ve ever seen on a blue eyed guy, suffice to say he was easy on the eyes. I chewed on my bottom lip as a feeling of déjà vu sneaked itself up in my mind. There was something familiar with this stranger. I looked away quickly into my cup as he turned to my staring gaze. The amber liquid swayed softly, but slowly, slowly it started to swirl like in a dream. It got faster and faster as the seconds crept on until it looked like it stilled, but I know it was moving faster than my vision could track.

“Let’s go!” Clyve sang suddenly, jerking me out of the trance I caught myself in. The man, he was gone. How long was I looking into the tea?

“Yep,” I sounded hoarse, and I cleared my throat as I walked out with the little bell chiming over the door. It was a lovely day along Arbor St., the tress along it were green and healthy and the air was lighter and fresher here than downtown. My heels clicked down the clean pavement, in time to my heartbeat I fancied. Clyve was saying something that Liam told him yesterday about one of the latest shipment at his book store.

“Uh, yes. I finally got in the latest edition of Hair Today. Really, do I have to ring those people every month when we’ve been subscribed for over three blessed years?” my temper wasn’t one that took its time.

“Bastards, every one of them,” he agreed, I couldn’t tell if he wanted to stop me right there or encourage me, but the twinkle in his eyes told me the latter was the case. I just laughed as I skipped lightly along. We were almost there when we heard someone running behind us. It was him.

“Wait!,” he called, “Get back! Hurry,” he said urgently as he caught up with us. But we hadn’t moved fast enough. Moments later there was an ear piercing screech in the direction we were headed. Our heads turned around as one as we saw an SUV spinning out of control. Heading right at us. I felt the man grab at my hand and saw him reaching for Clyve. The next few minutes of my life were a blur. I remembered hitting the ground hard, his arms came around me as we rolled to a stop.

The first thing I was aware of was the pain, it was everywhere. When I opened my eyes it was too bright and the world was slow waltzing, I could swear I saw the dust in the air. The next immediate thought was of Clyve and the accident. I tried to get up but the guy made me sit on the sidewalk. Sirens were blaring in the distance somewhere mingled with the screams and noises the people on the street were making.

“What’s your name?” he asked in a calm sort of voice.

“Marie, relax. That’s important right now,” he said slowly and I caught a hint of an accent. I wanted to protest be he held me firmly, “You’ve hit your head and it’s bleeding, the ambulance is here. Let me help you up.”

My head swiveled, he was here just now, where could he be? Then I saw the twisted wreck of the vehicle and my insides turned to ice. I tried to ignore the blood on the shattered windscreen but I couldn’t tear my eyes from the sight of the man, half of him underneath it all. His eyes were closed and was bleeding from his mouth and cuts on his face. The man was Clyve. I thought I screamed then, it that’s what you could call it. A raw, sandpaper and nails-on-a-chalkboard scream.

It echoed in my head. The grisly picture of him burned the inside of my eyelids. When I opened them again …

I was in the salon.

With the cup still in my hand.

The amber tea slowly stopped swirling as it had started. Still looking down at it I called out, “Oi, boy-o, what the hell did you put in the tea?” Was I dreaming? Could it happen? Would it? The way I was feeling right now, I wanted to curl up in a corner until I was sure I was awake.

“What? Nothing other than the leaves. Does it taste bad?” he was still in the back room as he shouted back. I had nothing to say.

I looked up in response to a movement in the corner of my vision. He was there. The guy. He met my eyes with a knowing ghost of a smile. He took of his cape, letting his raven locks slide off of it and unto the floor like scraps of velvet and walked up to me. He held a large warm hand against my jaw, leaned in close and whispered in my ear, “Order take out instead.” Then he was out the door before the questions could roll off my tongue. Clyve came out drying his hands.

“Who was he?” I pointed where the man was seated.

“I never saw him around here, probably a tourist. They’re in season. You gotta love ’em, they’re good for business.”

“Okay, sounds good. So what can you tell me about those magazines you guys were supposed to bring in?”

A chill ran through me then. I wonder if that guy was going to prevent that disaster up the street. I hope so, and I wouldn’t put it past him because I knew, knew it in my gut, that what I saw in the amber depths could have been true, enough so that perhaps he will.

I know this for certain though, I won’t be having tea over at Clyve’s for a long time.

A few other entries this week:

Filed under Picture it and Write!, Writing