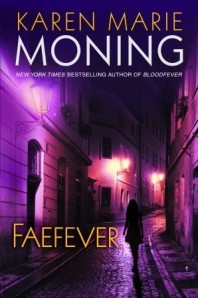 Rating: 4 stars     Age appropriate: 18 and up – Cussing and more explicit scenes than the books before.

As All Hallows Eve approaches and the city descends into chaos, as a shocking truth about the Dark Book is uncovered, not even Mac can prevent a deadly race of immortals from shattering the walls between worlds with devastating consequences.

I skipped writing a review for the second book in this series, Bloodfever, because I was a little rattled but not as much after reading Faefever and I doubt I can gather my scattered wits to even write a proper assessment of the book so I’m not even going too try too hard. It was simply dark. Like the previous two while reading them my mood was affected; edgy and anxious.

Mac continues her initial mission to avenge her sister’s murder and she’s taken the responsibility of her part in the fate of the world, which partly involves finding a dark fae relic the Sinsar Dubh, a book with so much evil on it’s pages and running through its spine it’s every sidhe-seer’s nightmare. Boy does it suck to be her.

Multiple times, in especially this book, Mac had me screaming to myself “Holy Christmas and all the Saints that lived! Woman what’s with you?” She’s just unbelievable, mouthing up to a fae prince, V’lane, and Jericho Barrons, her enigmatic host and partner. Well her hackles were bound to be up, but sometimes I believe she goes too far and she leaves me with my mouth open. Mac’s got nerves, I will give her that. Nerves are good things to have in abundance especially when you’re a much sought after one of a kind ( *a ‘tigger’ she thought, because she’s the only one. That cracked my up!) sidhe-seer in a foreign country with fae infested streets and no one to trust not even Rowena, the grand mistress of the sidhe-seers herself, because she wouldn’t give a rat’s petunia about Mac now then why would she in the future?

This story having taken place in the realm of fantasy, I say the characters were fine, even to the recently enlightened inspector Jayne. In my recent review of Darkfever I’d said Mac wasn’t as bad as some people see her. Fine, she was selfish, she was lazy, she admitted not wanting to have to be in the position of making such crucial decisions as she is now, she didn’t have to before. Mac’s now come to accept what she is, what is happening and still isn’t completely sure what it is she must do, but she is on the track … sort of.

The main thing is that she’s changing, seeing her world with new eyes. She has learned there are necessary lies that must be told and that there are pretty crappy decisions she must follow through whether she likes it or not. She’s come to appreciate the little things in life a bit more than she otherwise wouldn’t have if things had not turned out the way they did. Sadly such is the case with many, you don’t know how much you have until it’s ripped out of your hands.

As for the world building, I thought it was so good that there thought that it might actually exist, right now as I type this and you reading what I’ve written, scares the begeebers out of me. Seriously, the things Moning created *shivers* you’d be glad that this is just a book. God knows what’s really out there.

Over all it was a good book but I would have preferred the ‘adult scenes’ to be kept to a minimum. This is a series targeted mostly for the 20 and up age group but I think it’s so good and the lessons we can learn from them should be well … be open to younger readers. The ending was horrible with what happened to Mac and I would have prayed it wouldn’t finish on such a cringe inducing note. It was graphic in more ways than one. It ends on this stupid cliffhanger, the one I’ve been hearing about in various reviews before reading. When I said ages 18 and up, I meant it.

I especially despise cliffhangers, more so that I can’t get my mitts on the next book till around December, bloody exams … That, and I exhausted my funds for books for this month but in all honesty after going through quotes from Dreamfever (book #4), I think I’d rather wait a year more to read it.

I believe that in life things get darker and worse before they get any bit better, we’ll see that during these times of hardship that our will, our loyalty, our principles will be tested and what matters in the end is how much you’ve fought and how firm you remain standing against the forces that pits you against everything you believe in. Perhaps this is what Mac is going through and at the moment I’m in no condition to cry and worry over a fictional character when I’m stuck in my own sucky reality which is currently smelling of feet.

Look up the books on goodreads.com for more reviews if you need more convincing, expect a substantial amount of fan-girls.

* A reference to Tigger the tiger from Winnie the Pooh (I didn’t realize how strange it sounds until just now!)